Where to find the pattern for Jan Stawasz's Monster Doily…

Over the past few years, there have been many queries to me about this, so here is a status report.

The full pattern was published in Moje Robótki 8/2007 (a Polish needlecraft magazine). After several re-issues, it doesn't seem to be available from the publisher in Poland any more, nor are many owners of the pattern willing to sell it on. The pattern was not included in Jan Stawasz's two books. Surely it will be included in his third book of patterns – but we are all still waiting… (If you have managed to obtain a copy of this pattern, you should check out the lists of errata available in Facebook and Craftree – more details below.)

Anyway, for those determined to tat this doily and still seeking the pattern, there is now an alternate route! It's called the "Frankenstein Monster Doily" – Frankenstein, because the rounds were cobbled together from other doilies published in Jan Stawasz's first book, Tatting Patterns and Theory. So now, to tat the Monster Doily itself, all you need is a copy of this book, and the "recipe" for it.

That recipe was worked out and tatted by Marla Nikirk – many thanks, Marla! :-)

It's available in the Facebook Group "Monster Doily by Jan Stawasz", under the Files tab. Another place where you can find it is as an attachment to the database record for the doily in Craftree (https://craftree.com/patterns/1006). (You need a free membership to access this page.)

At this time, Jan Stawasz's book is available at tatting online shops such as Handy Hands (https://hhtatting.com/product/tatting-theory-and-patterns-jan-stawasz/) and Tatting Corner (https://tattingcorner.com/index.php?main_page=product_info&cPath=1&products_id=350). I recommend that you get both his books before they run out of print again.

These are included in the pattern for the Endless Hearts Braid with Corner. I just didn't want them to slip by unnoticed. 😉 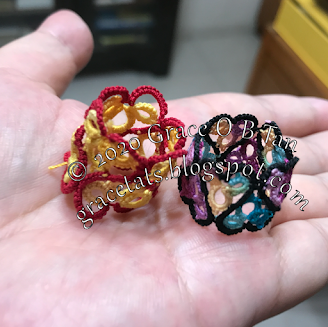 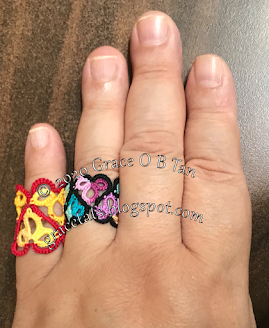 This post is actually a tribute to my test tatters. I had nine test tatters, and they came up with many different ways to do the various elements in the pattern!

I incorporated some of their suggestions, but not others. However, now that I realise what a wide variety there is in tatting styles, I want to share their ideas with all of you – because you may also have the same style.

I will probably update this post as and when I come across more suggestions or links...

Different ways to do the EPJ (Encapsulating Picot Join)

As given in the pattern (last page):

By substituting the elements in the join:

A. Make an FIP instead of a vsp on Chain (2). Then pull up the loop through both the FIP and the picot of Ring (1), put the shuttle through the loop, and snug up.

B. Make an IP instead of a vsp on Chain (2). Then pull up the loop through both the IP and the picot of Ring (1), put the shuttle through the loop, and snug up.

B. On Chain (2), make a CWJ into the Ring (1) picot; also make a vsp between the half-stitches of the CWJ. Then, later, do a picot join from Chain (3) into the vsp on the CWJ on Chain (2), and immediately make an FIP on Chain (3). Then, later, join Ring (4) into the FIP. (Two of my test tatters independently came up with this solution.)

I know of three main ways to do it. All three are listed here.

Turning the chain to make the S-curve:

In the pattern, the turn is accomplished with two first-half stitches. Other ways are:

A. Simply RW the pattern around the chain being tatted. (This was my original suggestion; it did not work too well during test tatting.)

C. Use a Reverse Join where joining to the previous clover (video tutorial here) (However, this will lock the core thread.)

Substitutions for the Catherine Wheel Join:

A. the Anne Dyer Join to the Smooth Side (or JSS) (video tutorial here)

B. the Slope & Roll Join (this can break the line of caps for the chain)

C. the lock join (this will put a dimple in the chain)

Substitutions for the FIP:

A. The Intruding Picot (as mentioned above)

B. The down picot (tutorial here)

This is a pattern I was working on quite intensely, in early 2013. In response to a request, I even created an SCMR corner for it. 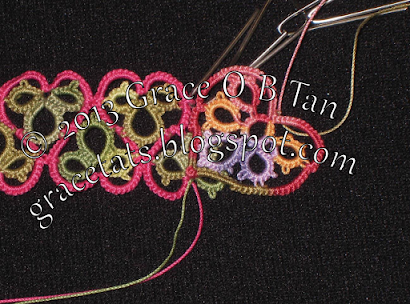 But then I stalled, because it was so onerous to tat! I needed two paper clips as strivers for every repeat of the pattern – they went on, then off, then on, then off, over and over again.

When it came to describing how to tat it – well, that was even more hideous! I took pictures for a tutorial, then realised that I still needed to write long and convoluted sentences about joining to the undersides of chains… 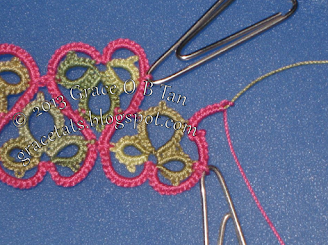 So, I just gave up – though I did go on to write up and publish other patterns using the little hearts (see under "My patterns").

But, in July, Muskaan shared about the Intruding Picot. I saw at once that maybe this picot could replace those pesky paper clips. So I dusted off my Endless Hearts samples and scribbles and started experimenting with it again. I eventually stumbled on a join that was new to me – I call it the Encapsulating Picot Join. That solved most of my problems, and I was able to tat the Endless Hearts without strivers or tears, and then to write it up and draw diagrams for it.

And now, after extensive test-tatting and rewrites, here it is at last!

My test tatters made many suggestions, reflecting a great array of tatting styles! I wasn't able to use them all, but I have compiled them in the next blog post, so that you can try them out, if you wish.

Yes, I finally had time to tweak my pattern — you can download it here. Many thanks to Muskaan for test-tatting my pattern, and for her very helpful and detailed comments on it. If you check out her test-tatting blogpost, you'll see her 3D tatted tree trunk for these earrings. I intend to try that out for my next pair!

Here are a couple more pictures of the earrings. The one in off-white is actually a prototype, and the one with the square beads at the base I tatted for myself — managed to finish them just in time for a party on Christmas Day!


Happy St. Patrick's Day to everyone who celebrates it! If you feel like tatting today, you can check out my Trefoil Hearts Shamrock in the Patterns section.
Posted by GraceT at 21:18 12 comments:

Actually, it's not quite ready yet. It's freeform and unconventional, so I've been uncertain how to write it up. But a few people have said that they're waiting for the pattern, so I will just put this out as is. I'd welcome any feedback – then I can continue to improve my description of this pattern. So, here it is! :-)
[Update March 2017: I have now improved the pattern and changed the links to go to the updated version.]

Better late than never — the pattern for the Dagmar Cross

In April 2013, the Danish Tatting Association sent out a call for tatting designs. They were celebrating their 20th anniversary, and they wanted to put out a commemorative issue with new designs. I heard about this through Craftree/InTatters (here's the discussion thread). I decided to try doing something for them.

I cogitated for a while. I felt I ought to design something Danish. The first thing that occurred to me was a Viking longship. But I felt it ought to be 3-D, and I didn't feel up to tatting that. Then I thought about Hans Christian Anderson's fairy tales. Swan? No, that had been done. Mermaid? That had been done, too. Tin soldier? Yeah, he was steadfast, but he didn't seem compelling. Then I thought that, just as there was a Celtic cross, there might well be a Danish cross. I Googled "Danish cross", and found the Dagmar Cross (have a look at it here — scroll down to see a picture of the original two-sided Dagmar Cross and read its story).

So I designed a tatted version of the side with the five medallions. And here is how my design looks: 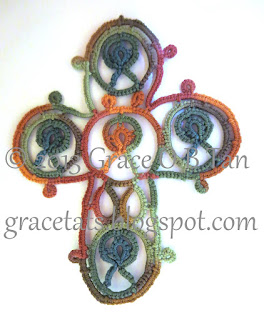 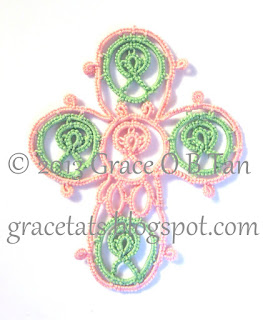 I submitted this pattern to the Danish Tatting Association in July 2013, in good time for them to include it in the December 2013 20th anniversary edition of their magazine, Orkis Bladet.

After that, with their permission, I started getting the pattern ready for publication on this website. I did the instructions and the diagrams and got them test-tatted. And then... well, I didn't like the tatted models I had. One (the green and pink) was in Milford Mercer thread, which is rather sticky. When I retatted it in better Lizbeth thread (Herbal Garden and Autumn Spice) the ring sizes came out a bit different. But then, I didn't use flat colours for the Lizbeth model, so the construction of the cross wasn't so clear. I thought I ought to tat another model. But — I will confess to you — this pattern was no fun to tat! And none of the flat colours I had seemed right, anyway. So I kept putting this task off, since there were lots of other things that were more fun to do.

But, tonight, I finally looked at my pattern again. It's really all right! The instructions are test-tatted; they are clear enough, and mistakes have been fixed. My two models do show quite well how the cross should look. So why am I making such a fuss? It's not perfect, but it will do.  So, all I did tonight was to add the watermarks to the pictures and diagrams, and at long last, HERE IT IS. :-)
Posted by GraceT at 00:36 12 comments: