Progress on the big Jan Stawasz doily — picots, rosettes and repeats, oh my!

I am a little sorry that Jan Stawasz doesn't seem to have given names to any of his lovely doilies and other works. Maybe it was because there were so many of them! In our tat-along thread in InTatters, I tried suggesting a few nicknames for it (Jupiter? Juno? Big Beauty?). However, none of them took. So this doily — the one published in Moje Robótki 8/2007 — is just going to be referred to as the Jan Stawasz Big Doily.

Anyway, I have been alternating between this doily and the Renulek Spring 2014 Napkin. This JS Big Doily is definitely harder for me than the Renulek doily. Renulek has tended to use one size of ring in any given round. But not Jan Stawasz! The rings are various sizes, with various intervals between the picots. The chains are various lengths, again with various intervals between picots.

And the picots are graduated — there are lots of bunches of three picots, with the centre one being bigger than the ones on either side. Also, since the decorative picots are important, I am trying to make them bigger than my joining picots — not with too much success so far; I tend to make small picots.

So, I have had to stay on my toes in tatting this doily, and I've been undoing mistakes a good deal.

After that, I thought I might get bored on Round IV, or perhaps I would lose count of all the simple rings and chains — that is, I would have the opposite difficulty from Rounds II and III — all the rings and chains are the same, or nearly so! So then I thought I would do the Round V rosettes first, then join them in as I tat Round IV. But I discovered that keeping track of decorative vs. joining picots was much harder on an unconnected rosette than on the simple Round IV. So I abandoned my first Round V rosette halfway and went back to Round IV.

But then I was curious and I joined in my Round V rosette, to see how it would look. I also had some notion of tatting both Round IV and Round V together, but found it too awkward to have three shuttles and a ball hanging from the work.
So then I proceeded with Round IV. Thanks to another member of InTatters, I knew I had to be careful to keep count of the joining and non-joining chains, and the joining vs. the decorating picots on the rings. That is, Round IV is not so very simple after all! So, I put strivers on the joining picots to keep track.

The strivers alerted me to a major mistake. I had joined to Round III too soon (at the ring marked by the orange slice), and the strivers were no longer straddling the valleys of Round III in a symmetrical fashion.
I started undoing the nine rings after my mistake, but then the thread broke, so I just cut them off and rejoined and continued. I still had just enough thread on my shuttle to finish Round IV. Whew!
You can now see all three colours of Coats Mercer Crochet that I'm using for this doily. The main colour is a pale golden-brown (Colour 627), and the highlight colour is ecru or cream (Colour 609). And, if you look closely, you can see that Round IV is pale brown (Colour 626) — just slightly less yellow than the golden-brown in Rounds I, II and V. My idea is that the pale brown recedes a bit, so I will use it on the rounds which are plain, more like "background".

Another first for me on this doily is that this Coats thread is somewhat older than threads I've tatted with until now. I am learning to be more gentle with it — not to pull too hard, lest it breaks. That said, it's a beautiful firm thread, and it doesn't stick or twist at all when closing rings. And its subtle colours are easy on the eye.
Posted by GraceT at 19:52 14 comments: Links to this post

I've finished Round 11 of the Renulek 2014 Spring Napkin (instructions can be found here — keep scrolling downwards until you get the instruction pictures for all the rounds).

I've now begun on Round 12. It's the first round where both the ring and chain threads are the same colour — Lizbeth Pineapple Parfait. So, I'm on the second last lap now … :-)

Finally starting a doily by Jan Stawasz — and it's a big one!

I've been in love with patterns by Jan Stawasz since my early days of tatting (not that long ago — I only started in December 2011 :-) ). You can have a look at his patterns here. I've bought both his books, and helped others to buy them, too. But the pattern for a certain huge and gorgeous doily wasn't included. You can see that doily here — it's Photo 34. This doily was published in Moje Robótki 8/2007. After a fair amount of trouble, and help from others, I got an original copy!

But I still didn't feel ready to start the doily. It has 18 rounds! Did I have the stamina to finish it? Well, in June, I went for a visit to Kuching, and there I met up with another tatter. She took me to a shop that stocks Coats Mercer Crochet Size 20. The price was so good that I bought 12 20g balls of it, in three colours. Then I came back to Singapore, and looked at my 16 balls of Coats Mercer Crochet Size 20, in four colours. I said, "What shall I do with all this thread?"

Meanwhile, there was talk on InTatters about tatting really big doilies. I thought, "I can use all my Coats thread for a really big, noble doily." — and this doily from Moje Robótki was the obvious candidate. So, I started trying to figure out whether I had enough thread. I posted an inquiry in InTatters about that, and discovered that many other people also wanted to tat this doily!

So, I've been encouraged to make a start. I decided that I needed to count stitches and make my own calculations. I used Karen Cabrera's method (see Lesson 73 on this page) to get the initial measurements on my thread. I now have all the calculations in an Excel sheet. I was able to calculate that I needed 4 20g balls of my main colour, and 1.7 balls of two other colours — or 7.5 20g balls, if everything was in one colour. I am also able to predict exactly how much thread to wind on the shuttle for each round.

So, now that I'm reassured that I won't run out of thread, I have made a start! Here are my Rounds 1 and 2:


And here's Round 3, still in progress:

I am not very successful at showing you the colours I am using. The main colour for the doily is a pale golden-brown, like wheat. Round 3 is cream-coloured. Since I have only five balls of the wheat-coloured thread, I'll also be using another pale brown colour for the plain ring-and-chain rounds.

And, I still haven't finished my Renulek Spring doily! I'm now half-way through Round 11. It's a good contrast, tatting these two doilies with their two different threads. Also, doing the Renulek doily was certainly essential in building my confidence for tackling this much bigger and more difficult doily.

Round 10 of the Renulek Spring Doily is done…

A few days ago, I finished Round 10 of Renulek's Spring 2014 Napkin (see here for all of Renulek's posts with the instructions). Here it is:


I'm already about a third of the way through Round 11. This is a fast round. Then, Rounds 12 and 13 will take longer.


For Round 10, I used Spring Green and Fruit Fizz (but swopping the colours compared to how I used them in Round 7). For Round 11, I'm using Spring Green again, but with Arctic Waters. And then, for Round 12, I will for the first time be using the same colourway for both ring and chain. And, I'm still cogitating on Round 13…

Meanwhile, I've started on a new project. More on that in my next post.

My completed Renulek Spring 2014 Napkin; how I chose my colours 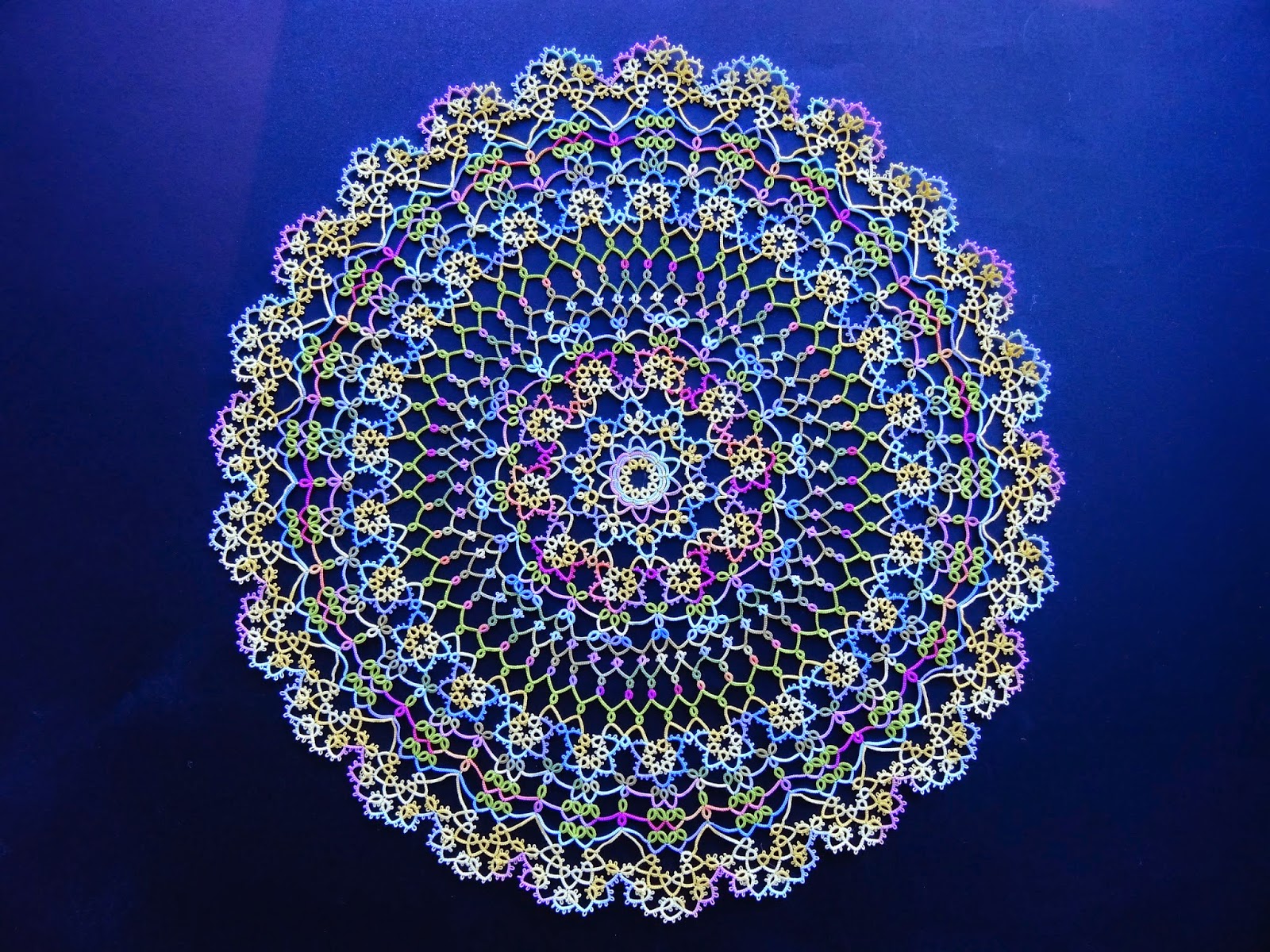